A Fix for SoundCloud Player not Working on Facebook Page

If you’re like me, you’ve been frustrated with not being able to post your SoundCloud track to your Facebook page for some reason.  I’ve tried the fixes found here from SoundCloud’s support to no avail.

After doing some testing, I’ve figured out why I’ve been having issues.

If you create your own graphics, you may have used .png files for your graphics, due to its lossless compression (meaning it doesn’t compromise quality even when compressed).  This is the problem.  Unfortunately, when using SoundCloud’s player in a post on FaceBook, the player will not show if you used a .png file for your image of that track.  When using FaceBook’s debugger tool, the field og:image will be blank.  When you post the link on Facebook, the picture will not show, and the player will not be available in the Facebook post.  See the images below: 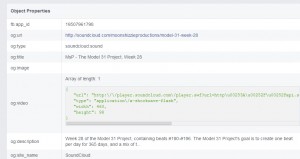 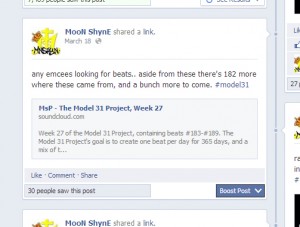 Both Week 27 and 28 were using .png files for images.  By changing the image in SoundCloud to a .jpg version, the player now works as intended.  I’ve switched it up on Week 29, and now we’re good to go. 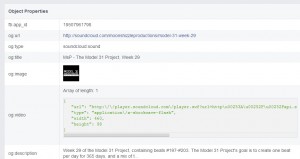 Using a .jpg instead of a .png 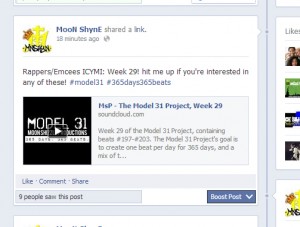 Player now shows with the .jpg.

Hope this helps!  As many of you have seen, it’s not like I’m not working on music, just haven’t had time for the blog.  That’ll change, so expect some new articles and things in the near future, to go along with the plethora of beats I’ve released these past 200+ days. =]